I’m from the school of thought that if you have something labeled “winner” then that is generally good, especially compared to that same thing that isn’t labeled “winner.”

However – and this shouldn’t be surprising – when it comes to baseball cards, that actually isn’t how it works, at least in the case of the 1992 Topps Gold Winner cards and their base variations.

This is a bit of a story, so buckle up, and shout out to BaseballCardPedia for always being great with the knowledge and backstory of the cards we love.

To understand everything fully, we need to define a few things before we can really address the “winner” cards. So, hang tight.

1992 Topps Gold cards are said to be the first true baseball card parallel set, which featured stamped gold foil on the player and team names on the front of the card and a “Topps Gold” logo watermark on the back.

Here you can see the difference between a 1992 Topps baseball card and its gold variation counterpart:

Also in 1992, Topps included a “Match-the-Stats” game card. With it, you’d scratch off different positions with the goal of getting three matching stats before finding an out. If successful, you’d then scratch off to reveal your prize, and one of those prizes was a pack of 10 Topps Gold cards! 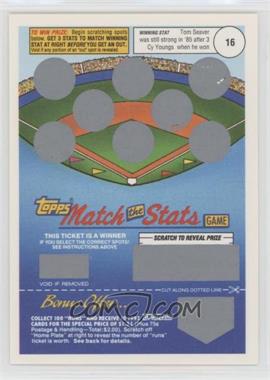 All of this sounds really cool and fun, right? Well, unfortunately, the game was compromised, as it was discovered that correct answers can be seen with a flashlight placed under the card.

Which brings us to…

The 1992 Topps Gold Winner card is a variation of the 1992 Topps Gold card, but printed for the sole purpose of being the pack cards distributed to Match-the-Stats winners. Meaning, to protect the integrity of the game and the base gold cards, these “other” gold cards were printed with “Winner” to se them apart.

As BaseballCardPedia mentions, the game was a success, and thus there were many more “winner” cards printed than the basic gold card parallels.

Here are the same cards from above, but with the “winner” card included:

All of this leads us to value—if there are more Gold Winner cards than base Gold, than the prices should reflect that, right? Here are some examples. Here I’m looking at the lowest price you could buy each card for right now on eBay (not including shipping):

So, that hypothesis holds true in these instances. Either version is tremendously expensive, though, and you might be able to snag each much cheaper via auction.