Hang with me, as I’m trying something new here. But I’ve realized in all of my different rookie card guides, there must be a better way to display all of this card awesomeness in terms of making things easier for you the reader to understand all that’s going on.

So, what better way to try and give things a visual jolt than with Aaron Judge – only the hottest player on the planet – and his rookie cards, of which interest seems to be through the roof these days.

As mentioned above, Aaron Judge has a number of cards out of 2017 Topps, with is “true” rookie #287 out of Series one. Given the number of different 2017 Topps RCs and variations, this true rookie is often referred to as the “fielding” version given Judge is back against that right field short porch at Yankee Stadium.

In addition to Series 1, Judge has a complete set version and a team set version, as shown here from left to right. 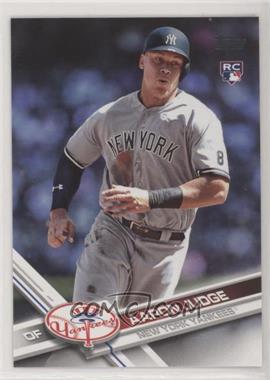 If looking at each of these on their own without any knowledge as to which card is the true rookie, it would be tough to discern. If you flip them over, though, you’ll see the numbers on the back of the card look something like this:

Now things are a bit easier, right? We can clearly see that the first is from Series 1, and while the second has a similar number, it is marked “complete set” to signify it’s the complete set variation or version of the card.

Next up from 2017 Topps we have the Update series, which is always known for “Debut” cards and others, like the ASG cards shown below. These are cards #US99, #US166, and #US1 from left to right. As you can see, each has the RC shield, but also a mentioning and/or logo to help you identify if true rookie or not.

Next, as is always the case with Topps flagship, you’ll need to keep an eye out for SP and SSP variations. These are cards that are also found in their respective series’ packs but because they are “SP” or “short print” are produced in lesser quantities and generally more valuable. While Judge only has a few, take a look at the different Ohtani Topps rookie cards to fully understand what I’m referring to.

For Judge, though, we have a Series 1 SSP variation featuring Judge with bat under arm while in the dugout. In addition, there is an Update #US99 SSP variation with a similar backdrop to the base “Rookie Debut” card, but with the bat on Judge’s shoulder. Last, there is another Update variation with Judge’s arms on the dugout railings. However, this card has the #287 numbering to match Series 1: 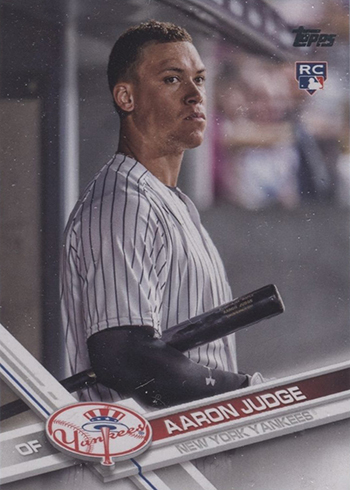 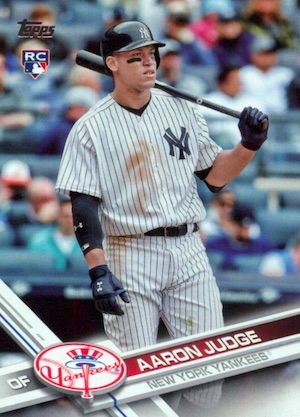 If you’re in the market for an Aaron Judge rookie card right now, one of the cheaper options will be Opening Day or Topps Holiday (more on Holiday below). That said, Opening Day also has short prints, not to mention foil parallels which spices up the chase for anyone who also wants something more than the basic rookie entry.

Below you’ll see base card and the rainbow blue foil parallel, which are both card #147. Next to them is the “close up” SP, and while missing the “RC” shield, the National Anthem Aaron Judge as well, which is selling for around $150! 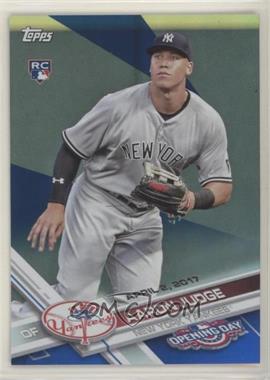 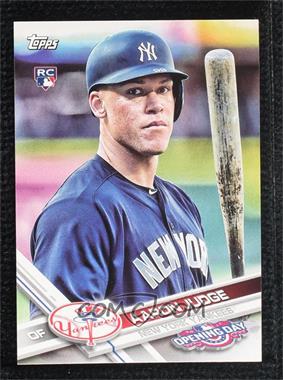 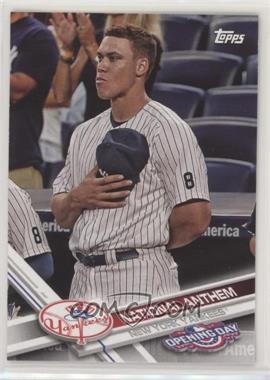 Wow, these Judge RCs are just the gift that keeps on giving (pun intended). Bad jokes aside, with Judge or any player’s cards really (well, except Steven Kwan RCs, for now) you’re going to have an abundance of options from Topps, including the main series release, Update, Opening Day, and now, Topps Holiday.

The holiday season release is themed as so, with snowflakes, snow, and other adornments, with a “glittery” variation known as metallic snowflake (I don’t think they had these on the list of any of our favorite antique baseball cards). In addition, one “fun” short print variation Holiday offers feature players holding Santa’s bag, on ice skates, fielding gifts, and more.

For Judge in 2017, we have the base version and the metallic snowflake. I don’t normally include autographs on this list, and won’t now, but will mention there is a Holiday auto to watch for as well. 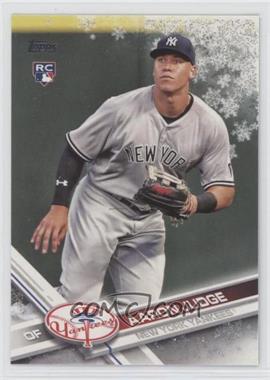 Thanks for reading! Click the link above to find any of these Aaron Judge rookie cards - and more - on eBay. This defaults to items currently for sale.

What does “flagship” mean?

Topps “flagship” refers to their main baseball card set. For instance, Topps releases Series 1, Series 2, and Update every season which are known as “flagship.” In comparison, Topps releases like Archives, Heritage, and others are not main sets but spinoffs so to speak.

Yes, like most baseball players, Aaron Judge has rookie cards outside of Topps—most notably, with Panini. While some of these are valuable, Topps rookie cards are generally accepted as the “best.”

How about Bowman cards?

Correct, Bowman is technically a different brand of cards from Topps, while still being a part of the Topps company. And yes, Aaron Judge has Bowman rookie cards but again, these typically aren’t considered to be a good as Topps rookies. Judge also does not have 1st Bowman cards.

What is a short print?

A short print card is one that is printed in lesser quantities. These cards are typically more valuable due to their scarcity.