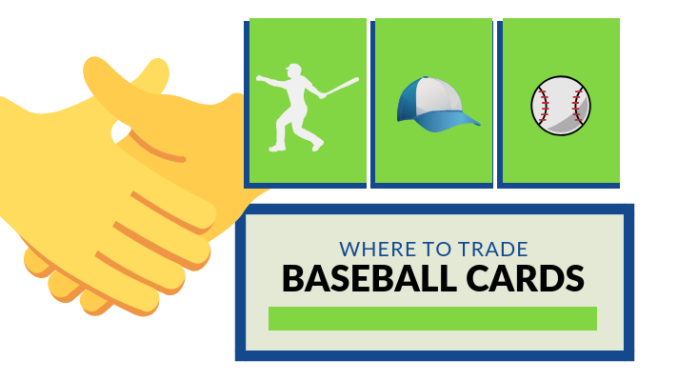 Affiliate Disclosure: This post contains affiliate links to eBay, Amazon, and other platforms within the content, sidebar ads, and in other areas. As I am part of the eBay Partner Network and other affiliate programs, if you follow these links and make a purchase, I will receive a commission. Likewise, as an Amazon Associate I earn from qualifying purchases.

Disclosure: This blog post is intended for informational purposes only. It’s not a recommendation for any one service over another, and wherever you choose to trade, practice caution when doing so.

Baseball card collecting is a great hobby; one of the best (quilting a close second).

Thanks to the variety in options from vintage cards to modern, the different baseball card brands, and the many nuances a single card can possess allows collectors to latch onto that one special thing and call it their own.

There also is no shortage of places to buy baseball cards, and thanks to different online platforms, enhanced opportunity to find that one special card you’re searching for.

But, what about trading baseball cards?

If there was any sort of downside to baseball card collecting, it’s that trading cards involves two people, and must involve two people who each hold something the other person wants.

As a young collector, it was easy to lug your binder collection over to a friend’s house for some fun and mindless exchanges. You might have also been lucky enough to attend a school with a baseball card trading club.

But as an adult, where do you turn? I don’t know about you, but I’m the only one – by far – in my circle of friends who has any interest in baseball cards, let alone making the trading of them a social activity.

Thus, I’ve had to explore other means for trading; Here is what I’ve found.

Where to Trade Baseball Cards

While a tougher process than buying, here are a few places to trade baseball cards:

And then as a bonus entry—have you tried StarStock? It’s a new card marketplace that allows for instant card purchasing and selling, which in a sense, looks a bit like trading.

For instance, you can buy 50 copies of a 2020 Topps rookie at say $.50 a piece. The cards don’t ship, but rather sit in your inventory, where you price them at $1.00 each. Over time, as the card increases in value, your 50 copies sell, and you have $25 profit to “trade” up or buy into something else.

Anyway, might be a stretch, but worth a mention. Here is a guide on how to use StarStock, and here are the details for a more traditional trading experience.

The number one way I trade today is on social media, and on Twitter, specifically. Others utilize Facebook and even Instagram as a means to connect with other traders. Since I only have Twitter trading experience, I’ll limit my pros and cons to that arena, specifically, but knowing that most of these facts should carry over to other platforms as well.

On one hand, Twitter surprisingly has a large trading card community, most likely due to the platform’s ease of access for the masses, and pure messaging and photo messaging capabilities.

While Twitter feeds don’t necessarily make for maximum visibility of each and every post you make (meaning only a fraction of your followers might see a particular tweet), the presence of larger hobby-focused accounts allows for ample retweets and helps facilitate trade requests.

Those who have been around on Twitter long enough are also very good about seeing a card or need posted, and then tagging individuals they know would have an interest. For instance, if someone posts an A’s card for trade, I’d get tagged so that the tweet shows up in my notifications.

Like anything, though, there are many “here today, gone tomorrow” accounts, and it’s tough to gauge just how trustworthy another trader might be (red flag warning tips to follow below).

Meaning, follower count isn’t always an indication of a trader’s reputation, as many scammers having a decent following, and other trustworthy traders might not have much of a following at all.

Another downside is that some Twitter users tweet and talk about many other things not related to the hobby. This is totally fine, but if you are looking for card-only talk, you’re not going to get it here.

While not as easily found, there are still plenty of in-person trading card meetups that take place. This can be at its smallest level at a local card store, or maybe a little larger at a designated event center like a local hotel or community center.

There is also plenty of trading taking place at larger events like the National Sports Collectors Convention, but would function more as a one time stop in and out versus a “club” that might regularly meet at your local shop.

If you’re lucky enough to have a card shop nearby, check in on any events they might be holding, and also ask how they keep tabs on anything that might be coming down the pike. You can also refer to these show calendars:

Different than general public social media, there are a number of baseball card forums where trading takes place between members. Some of the largest and most well known include:

The main benefit with trading forums is focus. Thanks to the different topic rooms available, you know if you’re in a “trading” room, the conversation will be comprised of 99% trade chatter.

As a result of any of the above options, and any other trading environment, it’s not uncommon for smaller, more secure and even exclusive trading card clubs to emerge.

These are groups of collectors, who under the guidance of some type of moderator, will utilize other forums and platforms to trade among themselves. Think of it as a private Facebook or Discord group.

The difference here is, membership is typically invite only, and there are stricter guidelines on the type of activity that can take place, in comparison to something like general social media like Twitter where everything is generally a free-for-all both in terms of who can participate, and what can be talked about, etc.

This option provides the most club-like atmosphere, where traders interact with the same group of people on a regular basis, allowing for stronger friendships to form, different events to take place, and more.

The one major downside about trading is that it involves dealing with other people, most of whom might be complete strangers.

Thus, when trading, it’s always best to take a cautious approach and due diligence. While there are some very generous traders out there, a “too good to be true” offer usually is, especially when combined with any of the following red flags.

Again, not any one of these being present means you’re in for a bad deal. At the end of the day, you need to trust your gut as to the legitimacy of the offer on the table.

In addition to feeling out the deal, there are a few tools you have at your disposal for a more concrete reputation check.

Feedback Score: Some trading forums have their own feedback system, making it easier for you to check whether or not someone has engaged in successful trades before.

Of course, there are some who will build up small deals with an eye on soon pulling a fast one. On the flip side, every new trader must start somewhere, so a score of zero doesn’t mean you need to immediately run from the deal.

Social Media Watchdogs: There are a few groups dedicated to exposing scammers and providing any tips on individuals who may be operating with the intent to mislead. Sportscard Scammers is one example.

Search: Meaning, if on Twitter or a sports card forum with search functionality, simply search the name of the person you’re trying to trade with to see what comes up as attached to their name. You can get a feel for how this individual handles themselves in normal everyday banter, and if others have thanked them for past deals, etc.

Replin: This tool actually isn’t for traders, but good to know about if you’re considering purchasing cards off Twitter or elsewhere that doesn’t have a built-in feedback system like eBay. Replin basically provides a reputation profile you can take with you, allowing individuals to purchase directly through the app’s PayPal integration, and providing a system for feedback once a deal has been completed.

In the end, baseball card trading is such a fun hobby, but can also be lucrative given the high dollar amounts of cards being dealt, both old and new. Thus, you’ll inevitably have “traders” trying to scam and take advantage for a quick buck. Survey the situation from an outsider’s perspective, trust your gut, and go from there.