Every 1/1 card is rare. We all know that, it makes logical sense, etc. However, when you add up the amount of 1/1 cards every player has, that rarity and uniqueness takes a bit of a hit, right?

Anyway, the point here is I want to take a look at some rare Barry Sanders cards, but as an insert-nut who grew up in the 90s, I’m not talking cards that are rare because their serial number says so.

No, I’m talking about those rare cards where, if you bought a pack of cards back in the day and pulled one of these, your feet would leave the floor. The card that, if you did in fact pull it back then and still have it now, you could cash it in for a pretty nice chunk of change.

And also to note, I’m trying to also stay away from those cards that have a handful of variations, and thus one rarest variation that makes the card valuable. Think Star Rubies, etc. Still cool and rare, and you might see some of these below in one form or another, but just saying.

I’ve looked high and low and just can’t find the odds on this one, but you’ll have to trust me. I mean, consider this: recently, only two of these cards have sold, one was an SGC 9 and the other a BGS 9. Now, this isn’t a blog about the differences between card grading companies, but I can tell you that these two grades usually don’t really compare to a PSA 9, let alone a PSA 10.

I’ll admit, I’m a baseball-first guy, but I recently purchased a couple of 1997 Skybox E-X2000 Essential Credentials, and I couldn’t believe what they were selling for…and that was just Torry Holt and Herman Moore. So, I had to check out what a Barry Sanders looked like both in terms of design and selling price, and wow. And that’s only a PSA 9 (“only”!).

Just a magnificent and magnifcently-rare card all around, with the sparkle border, 3D illusion, beautiful sky background, and one of the greatest to ever hold a football, well, holding the football.

Any time I have the chance to think back to when the year 2000 was a thing, I take it. What a wild time. And while this one was only a 1999 looking forward to the year 2000, it still played up the world-changing technology-driven world we all expected in a blink of an eye when the calendar turned.

Check out this informative post on the set, which likens the 2000 men set to basketball’s 1997-98 Jambalaya set, and I like that comparison. That said, I do prefer my rare cards to have more of a design quality, like the 2000 men card shown above. As that same blog post points out, Sanders wasn’t even active for the year 2000, making his checklist inclusion a bit odd, but I don’t think many collectors would complain!

The only card on the list featuring Barry Sanders in his Oklahoma State uniform – and only “rookie” at that – this 1991 Wild Card 1000 stripe definitely has a different look and feel than the other cards on the list. But, if we are talking rare, it absolutely needs to be included.

And, I had to dig deep into some older forums post to get a better understanding of just how rare these cards are, and what they mean to the hobby in general. I’m not sure how accurate any of these statements are, but fun to think about.

Here is a 2015 post from someone in the Blowout forums:

Lets just say they are not easy finds, and very hard for a Louis Oliver typewho is a forgotten fan favorite.”

And then in terms of odds, here is a post from the collectors.com forums from way back in 2013:

Now, because I felt odd not including the types of cards I mentioned in the intro, here are some really cool, rare, and valuable cards that you’ll want to keep an eye out for. These are mostly variations, so a good rule of thumb is, if a card is shiny, gold, refractor, etc., then do due diligence and check out the value. 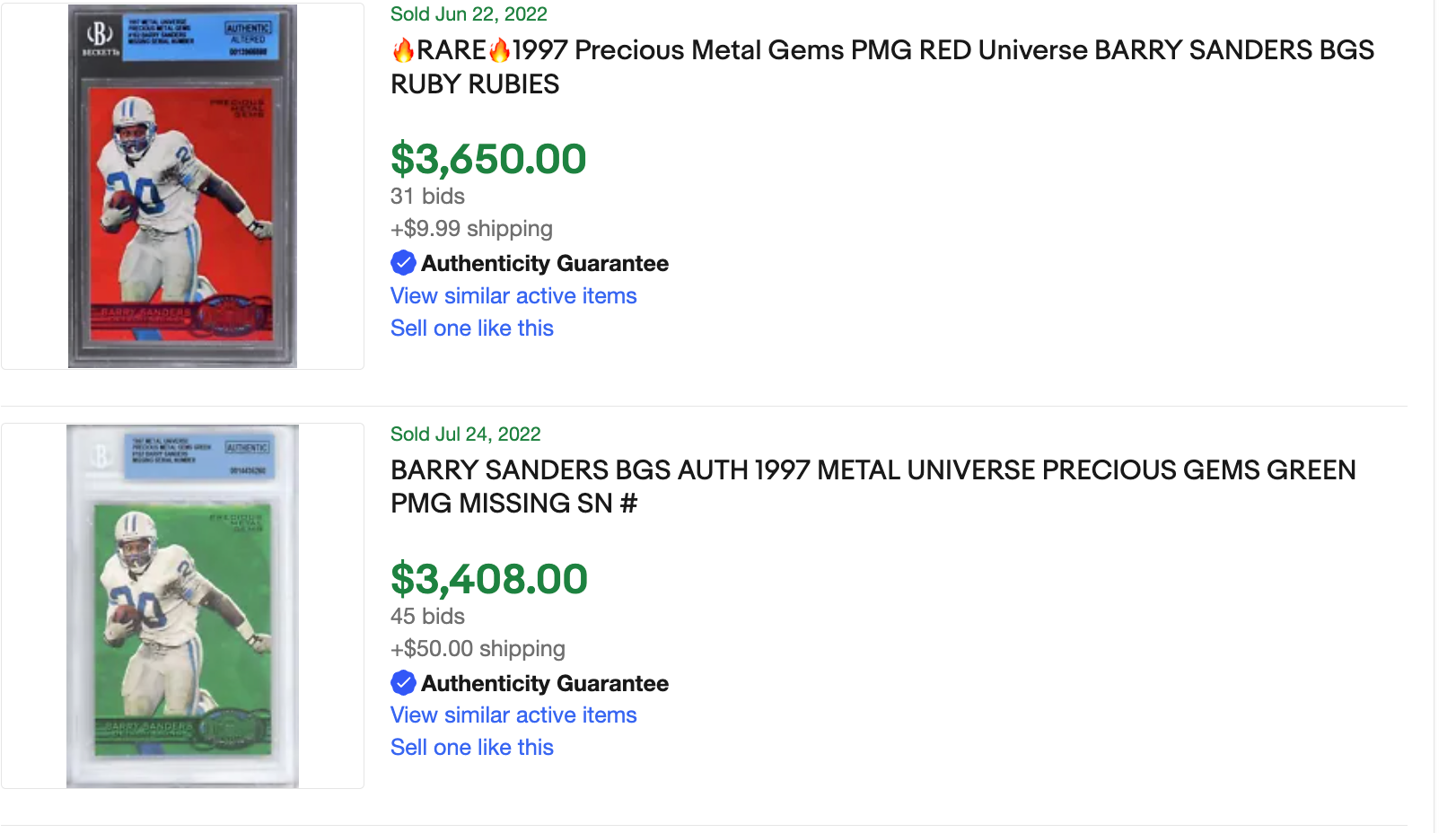 When I’m looking for rare or valuable cards from a particular player, I just like to search the player’s name in eBay, filter by sold listings and then sort by highest price. I’ll also try and filter things out like “auto” etc. You can do that with the button below—good luck!

Find on eBay
About Ryan from Ballcard Genius 207 Articles
Ryan is a lifelong member of the hobby and sports card expert. Specializing in baseball cards, and showcasing a love for flashy 90s inserts and all things A's, Ryan enjoys sharing the ins and outs of collecting, while highlighting the best cardboard options to add to your collections. Last Time Ago LLC dba Ballcard Genius.
Xing

Below is a list of NFL team mailing addresses best utilized for fans wanting to send mail or items to their favorite players. Specifically, these mail submissions could be TTM autograph requests and more. Please […]

To say the card market shifts quickly and drastically would be an understatement. So, futile would be my efforts to put together an ultimate list of the most valuable Prizm cards out in the wild […]