2022 Topps Series 2 has launched, and with the release, checklist anticipation and chatter has been flooding social media and forums.

Unfortunately, the many who were hoping to see today’s young stars – like a Julio Rodriguez rookie card, Bobby Witt Jr., Jeremy Pena, and others – make their flagship rookie a reality, are now left disappointed, and already looking forward to Topps Update.

But with that said, always keep this in mind—was a Taylor Ward rookie card the talk of the town in 2019? And while that’s just the most recent example of a sneaky name stealing the RC headlines recently, there are countless examples over the years of players who had an under the radar flagship release, only to have their cards catch fire at some point, and even years after.

Not to mention that while Witt and Rodriguez don’t have base flagship rookies, they each have autos on the 1987 checklist, which look spectacular, and will surely be nice chase cards for anyone looking to get in on the ripping action.

Besides all of that, can I interest you in Juan Yepez or perhaps O’Neil Cruz? (Skip to the end for more rookies to keep an eye on. And if you want something in video form, here is a nice breakdown from Kyle at Let’s Talk Wax:)

So, again, while this list of 2022 Topps Series 2 Rookies isn’t met with the shining stars we all were hoping for, let’s face it, many of us are still going to buy the product. And with your purchase, while it might be easy to cast aside most of the names below, don’t be so quick to give up on some of them proving to be valuable at some point down the line.

With nearly a month since it was released, let’s take a look at some of the most valuable 2022 Series 2 cards that have been pulled to date, according to eBay. Please note many of these cards have variations, which won’t all be listed here. This also is not including 1/1s.

To check out the entire 2022 Series 2 checklist, head on over to Cardboard Connection or Beckett—both of which always do an outstanding job not only covering the cards that will be included, but also provide all the info you need on odds, variations, and more.

For now, here is the recent list of 2022 Topps Series 2 Rookies for the upcoming release. It’s a sortable table, so feel free to have fun with the team name, card numbers, and more.

So while we don’t have many of the big and anticipated names, which players might be good to pop into at least a penny sleeve?

Not only is his caliber of play make this an interesting card to hold, Yepez doesn’t have a ton of cards already out there like some of his peers. As a result, you’ve seen his Donruss rookies perform pretty well (I sold a Career Stat Line /274 RC for $18 after buying it – and thinking I overpaid for it at $7.50).

Cruz is also an interesting case, but for different reasons. One, he already has a large number of Bowman Chrome cards, including his 1st Bowman chrome all the way back in 2016 (which famously misspelled his first name as O’Neal). Two, Cruz already had a RC in Topps Heritage. And three, going against what many thought to be the case coming into the season, Cruz hasn’t yet been called up to the Pirates.

Wait, say what? Yes, while we all rushed to check out the 2022 Topps Series 1 list of valuable cards to find a Wander Franco RC, the young star will also be included in Series 2. Of course, this isn’t a “flagship” or major rookie card release for Franco (considering he wasn’t only in the Series 1 base set, but a number of subset cards).

As Beckett Hobby Editor Ryan Cracknell pointed out on Twitter, this will be a combo card for Franco, and some other guy you might have heard of.

In addition to those named above, here are a few others to keep an eye on: 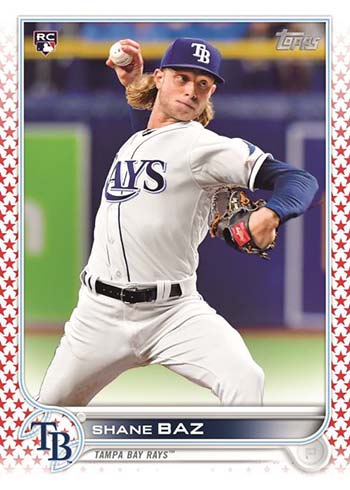 So, as always, happy ripping! And, don’t be so quick to give up on a player. The question I always ask my self is, does it make sense to go through the trouble of selling a card for $1 or just hold on to in with the hopes that he catches fire some time in the future?